Although the importance of gastrointestinal (GI) health is increasingly recognized, the lack of a robust, non-invasive system for objective GI electrophysiologic assessment hinders complete understanding of the impact of GI in health and disease. Novel approaches to diagnose and understand functional motility disorders are critical to improve patient care, offer effective and personalized therapies, and reduce treatment costs. Current clinical tools to diagnose most GI conditions are invasive (e.g. endoscopy or manometry) or require radiation (e.g. gastric emptying scintigraphy).
​
The gastric slow-wave is generated in a pacemaker region of the stomach, analogous to the heart, and propagates axially down the length of the stomach to the small intestines. This leads to the mechanical contractions (i.e. peristalsis) that breaks down food and propels it along the GI tract. Recent studies have established the link between gastric slow wave propagation abnormalities and gastric functional motility diseases, such as gastroparesis, chronic nausea and vomiting, and functional dyspepsia. We have developed the high-resolution electrogastrogram (HR-EGG), which is a method of extracting features of gastric wave propagation using a noninvasive multi-electrode array. We can determine the presence of peristaltic waves, along with its propagation direction and speed. We believe this work is a step towards improving the diagnosis of GI diseases and has the potential to inspire novel drugs and therapies, ultimately improving clinical outcomes.

The need to reason about uncertainty in large, complex, and multi-modal datasets has become increasingly common across modern scientific environments. The ability to transform samples from one distribution P to another distribution Q enables the solution to many problems in machine learning and has been actively pursued from theoretical, computational, and application perspectives across the fields of information theory, computer science, and biology. Performing such transformations in general purpose manners still comprises computational difficulties, especially in high dimensions. Recently, we consider the problem of computing such “measure transport maps” with efficient and parallelizable methods. Under very mild assumptions, we provide a convex optimization problem to constructing such maps from only samples of P. We recently have also leveraged findings from nonequilibrium thermodynamics to represent the transport map as a composition of simpler maps, each of which is learned sequentially with another related efficiently solvable convex optimization algorithm. We are currently using this framework within the context of Bayesian inference for uncertainty quantification in biomedical datasets, active learning for human computer interfaces, density estimation for probabilistic sleep staging with EEG, and generative modeling with images. 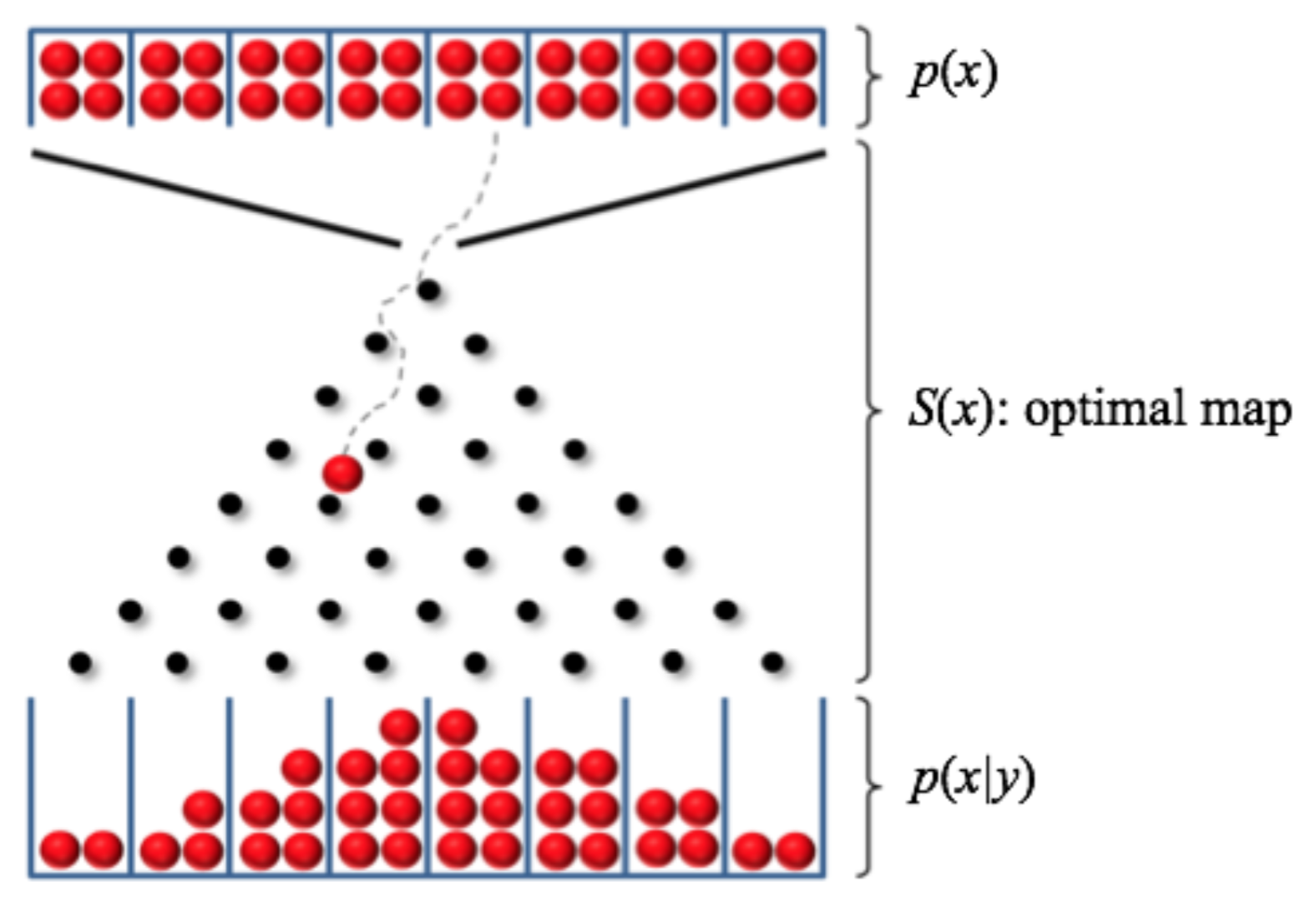 Many current viewpoints about how neural processes integrate to elicit complex brain function posit that populations of neurons in the human brain are connected to form functionally specialized assemblies.  With the increasing ability to record multiple neural signals at different brain areas simultaneously, one core issue in neuroscience research is understanding the mechanistic phenomena and how to analyze these ensemble recordings and infer the structure of these mechanisms.  One such approach to attempt to understand this mechanistic phenomena is by using a statistical measure of causality.

The directed information is an information-theoretic quantity analogous to mutual information that encodes the fundamental limits of communication with feedback.  It is directional and non-symmetric.  From the viewpoint of a sequential prediction under the log loss, it can be shown to be philosophically consistent with “Granger causality”, in that it measures directionality of causality (e.g., X causing Y) by assessing whether or not past values of X and Y help to predict the future of Y better than only past values of Y. We have used the directed information and extended it to the “right” notion of causality when we record more than two time series simultaneously.  By espousing a coupled dynamical systems and generative model viewpoint, we show that the “right” measure of causality within a network of many interacting processes is the “causally conditioned directed information”.

We have developed provably good estimation algorithms to estimate these quantities from data and have demonstrated how the network causal dynamics represent information processing in the brain.  In the primary visual cortex of an awake-behaving monkey, we analyzed simultaneous spiking and field potential recordings and demonstrate a consistent change in causal interactions between cells before, during, and after a visual stimulus evokes a motor response. Our procedure identifies strong structure in the estimated causal relationships in the spike trains, the directionality and speed of which is consistent with predictions made from the wave propagation of simultaneously recorded local field potentials.

Our approach is applicable to an arbitrary modality and thus can be applicable to a variety applications, including social networks, economics, and network security.

The bottleneck in developing novel physiology-guided human computer interaction systems such as BCIs is how the physiologic data is acquired. As such, our group began to collaborate with materials scientists so that we may pivot into also developing novel technologies that can acquire high-fidelity physiologic data from the human body. We go beyond conventional physiologic data acquisition systems which have limited ability to monitor people in their normal daily lives, in no small part because of the adage from physics: “in the process of measuring a system, you undoubtedly perturb it”. In a 2011 Science paper, our group has recently demonstrated foldable, stretchable electrode arrays that can non-invasively measure physiologic signals (including EEG, EMG, ECG) without the need for gel. The electrodes rely on layouts recently developed for silicon electronics that offer linear elastic responses to applied force, with the capacity to fold, twist and deform into various curved shapes. Stretchable electronics have the key advantage that they can wrap arbitrary, curvilinear surfaces and, at the same time, achieve mechanical properties that approach those of tissues of the human body (e.g. skin). These capabilities are especially significant for applications in skin-mounted devices to monitor physiology in mobile environments.

Chronic sleep deprivation and fragmentation have been found to be associated with chronic health problems such as diabetes, coronary artery disease, and even cancer. Despite this, sleep as an important modifier of human disease is under-investigated. With nearly 40% of US adults experiencing problems with sleep – e.g. obstructive sleep apnea (OSA), insomnia – and many millions undiagnosed, all signs indicate that sleep is important for health at both an individual and population level. Despite this, one major limitation to investigating sleep at this scale is the gold standard polysomnogram (PSG) – an obtrusive, costly, and highly specialized method relying on multiple sensing streams to manually classify sleep based on rules first described in the 1960s. Despite its shortcomings, PSG remains the gold standard because less intrusive measurements to date, such as wrist-worn devices, have only modest correlations with total sleep time, and are unable to investigate detailed sleep architecture (the different clinical stages of sleep).

In our sleep monitoring research, we aim to enable objective and scalable measures of clinical sleep through physiologically-guided analytics and reduced sensors/data streams. Through state space dynamics and probabilistic models formed from clinical data, and wearable bioinstrumentation to measure sleep physiology, we can robustly stage clinical sleep in healthy individuals, and those diagnosed with varying degrees of obstructive sleep apnea severity. Furthermore, these methods can be extended to means of automated cortical arousal detection (indicators of nuanced sleep fragmentation), and classification of classical sleep EEG signatures such as K-complexes, sleep spindles, and rapid eye movements. Our hope is that the application of these methods will enable real-time wake-sleep assessment in the hospital environment and allow investigations into acute patient recovery/deterioration as a function of sleep.

A brain-computer interface (BCI) is a system comprising a direct communication pathway between the brain and an external device. Our research group has developed an interpretation of the BCI as a system comprising multiple agents cooperating to achieve a common goal. This “team decision theory” viewpoint has led us to leverage insights from feedback information theory and control theory to develop direct brain control systems that are easy to use, and are theoretically optimal. In short, must be communicated to the interface via recorded brain signals – and given feedback from the interface’s dynamics – so that it may help the user accomplish a task. This new interpretation, wed with recent results on implementable, optimal, feedback information theoretic coding schemes (titled “posterior matching schemes”), led us to design brain-machine interface paradigms from decentralized control and feedback information-theoretic perspective. We have shown that this framework has allowed us to design BCIs that can accomplish tasks that previously before were not possible, and/or with previously unachieved performance. For example, we have been able to use recent works of feedback information theory and optimal transport theory to allow for multi-user collaborative BCIs.

The essence of the optimal feedback-based posterior matching scheme – to communicate to the decoder information about the message that is “statistically independent of everything the decoder has seen so far” – led to the hypothesis that its structure is intimately related to stochastic control. As such, it indeed is acting like an optimal stochastic controller, over the space of posteriors, or decoder’s beliefs about the message. This work shows that an optimal feedback encoding scheme acts to geometrically “steer” the decoder’s belief towards certainty at the message point. We have been able to extend posterior matching to applications where the message point is in arbitrary dimensions, and use the theory of optimal transport to develop methods to construct recursive and optimal strategies. 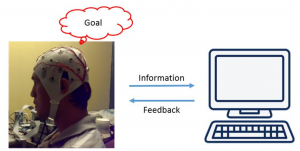